THE WAY HOME :  Monday, 14th June.
Tired of being cooped up in the caravan, at around midday on Tuesday (8th) we decided to go for a drive into town and a walk along the Ceduna jetty. 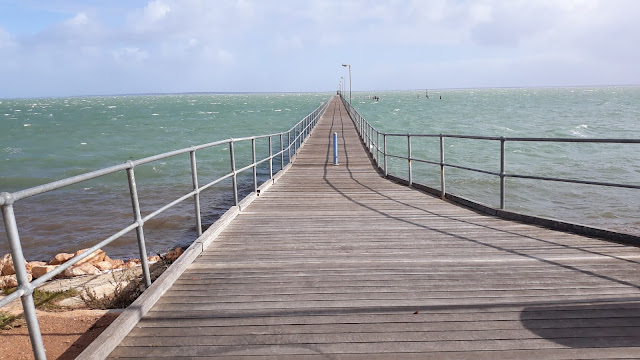 The jetty walk didn't happen, after struggling against the wind to open the car door and being almost knocked over by the wind when we did manage to extricate ourselves from the car, we gave it a miss and went for a short walk through town instead, where we were a little more protected.  After the town walk we drove along the foreshore and checked out an attractive new estate before returning to the caravan for the rest of the day, filling in the time by watching a film on tv, reading and snoozing.
On Wednesday (9th) we left Ceduna at 8.25am with little wind, grey sky and occasional showers.  We had to stop at a railway crossing for a very long train 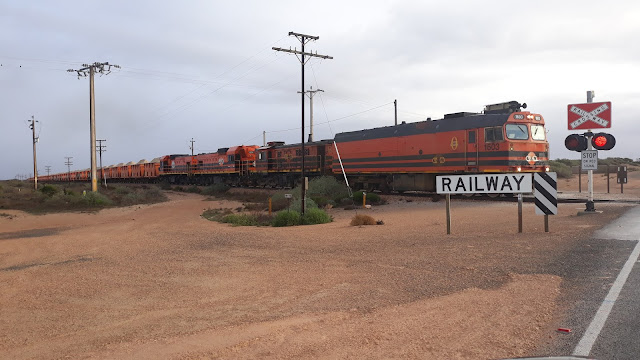 to pass by and 15 minutes later 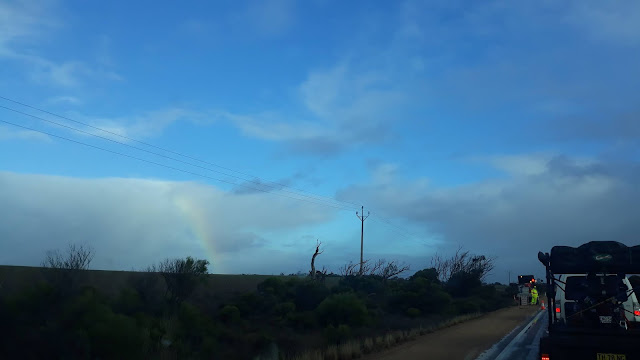 a 20 minute stop for roadworks. 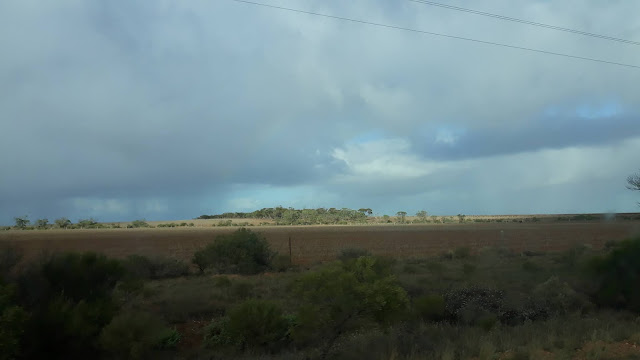 On the way to Penong, where we stopped for fuel, the sun peeked through the clouds 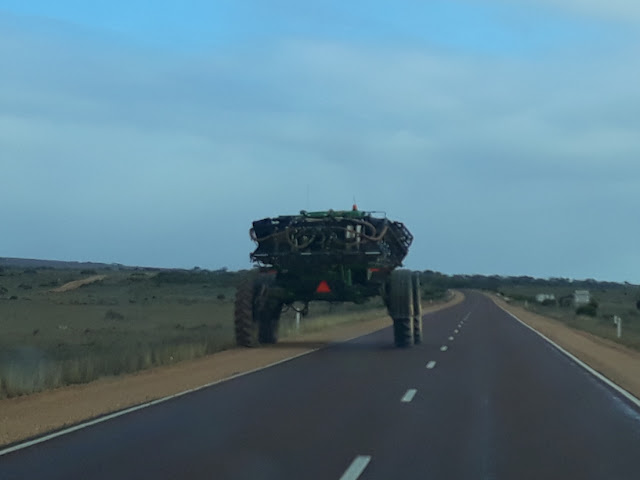 and shortly after leaving Penong, we saw what looked, from a distance, like something from outer space but of course, was merely a farm machine of some sort.  About 75kms west of Penong an echidna, looking  very much like a crow or two (also from a distance) picking at roadkill in the middle of the road, narrowly missed being squashed as by the time we could see clearly what it was, it was too late to stop but we were able to pass over it, thus avoiding carnage.  It is to be hoped that it reached the safety of the scrub before any other vehicles came along. 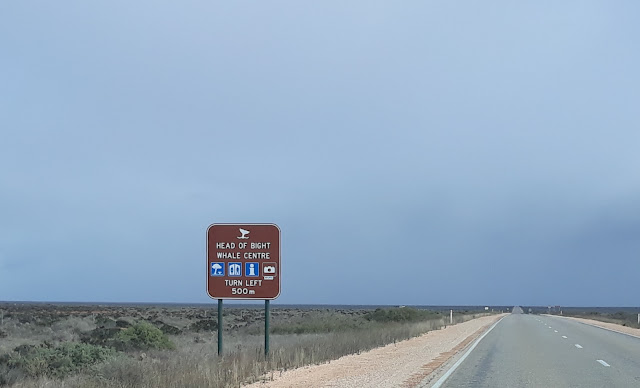 We'd had thoughts of turning left at the Head of Bight Road but the next sign informed us that there were no whales in residence that day so we continued on down the road to Nullarbor Roadhouse, where we topped up the fuel tank, made lunch and had a lazy hour or so relaxing and taking a couple of photos that we missed on the way east. 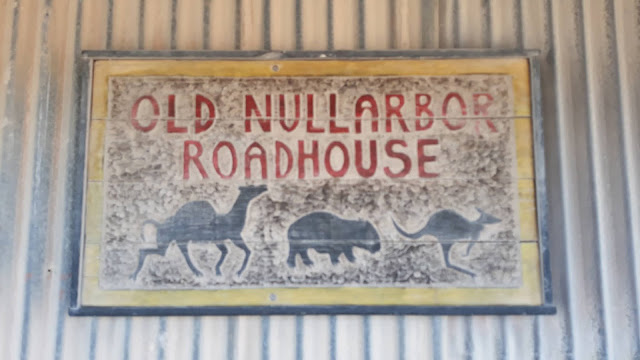 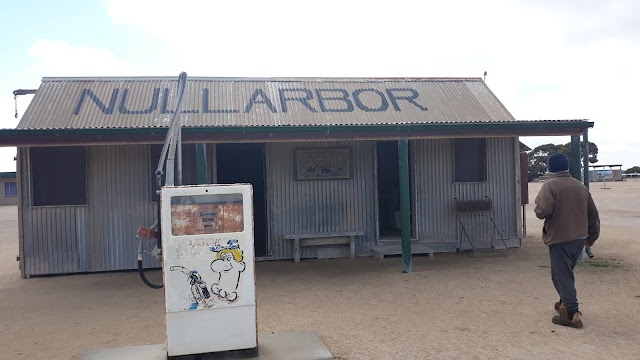 I tried to take the photo before this gentleman stepped into the frame but he wasn't bothered about being in the picture! 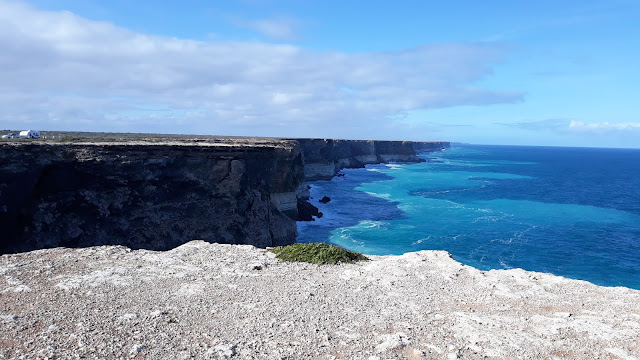 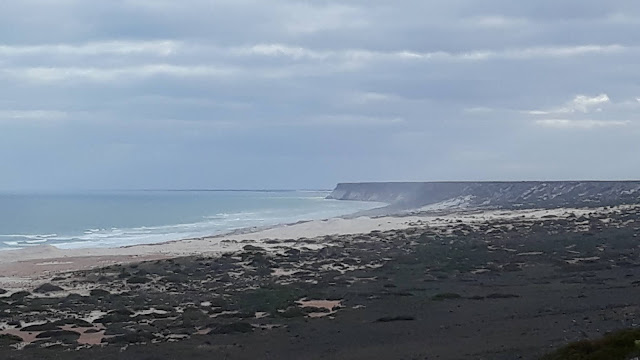 Views of the stunning Bunda Cliffs from various lookouts. 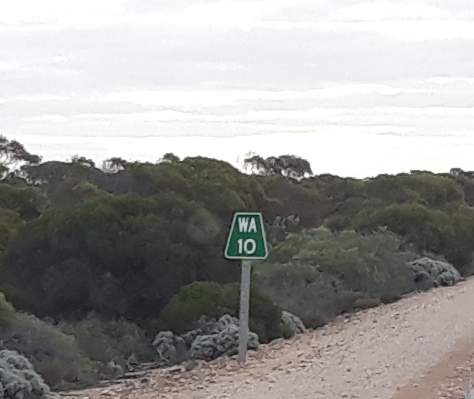 A welcome sight, close by was the 10K Peg rest area where we spent our last night in SA. 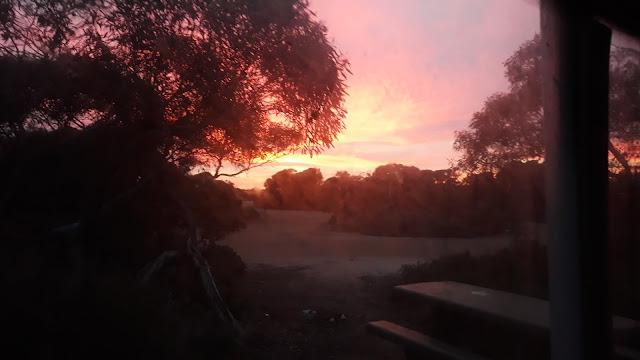 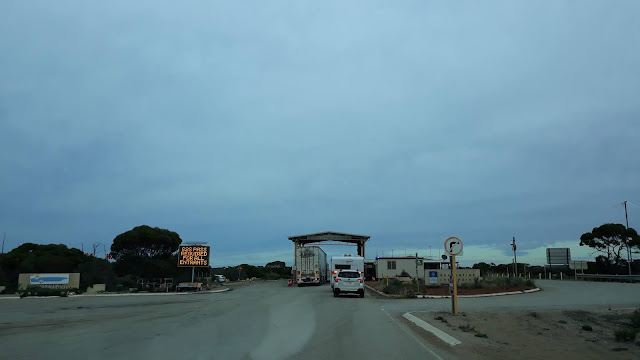 Our time at the SA/WA border lasted 20 minutes.  The Senior Constable on duty asked where we had spent the last two weeks, we answered "SA", he scanned our G2G passes, checked our drivers' licenses, the quarantine officer in attendance checked the car and caravan for contraband fruit and vegetables, didn't find any and so at 9.00m SA time, we were admitted into WA.  First stop, Eucla for fuel and a pit stop, we did not stop at Mundrabilla as they do not have unleaded petrol so on to Madura where we topped up with fuel and checked out the menu.  Not finding anything tempting on their menu, we carried on to the nearest parking area and lit the gas to make our own morning tea.  Later, and for the first time in more than a dozen Nullarbor crossings, we bypassed Cocklebiddy, stopping instead at Caiguna for the fuel top up, Chiko Rolls and coffee. 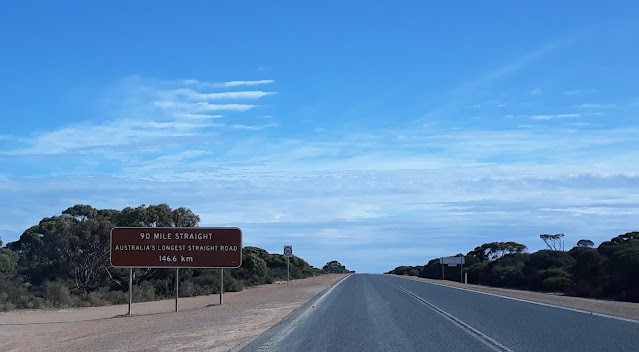 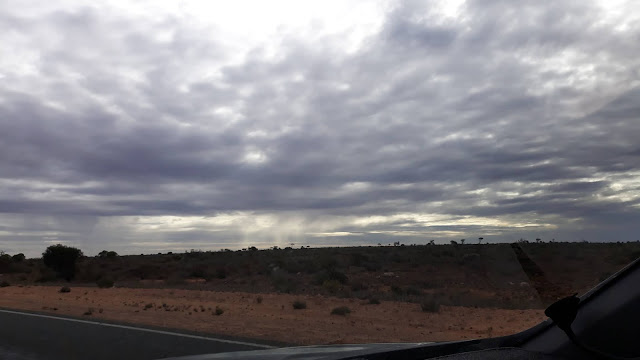 Rain in the distance 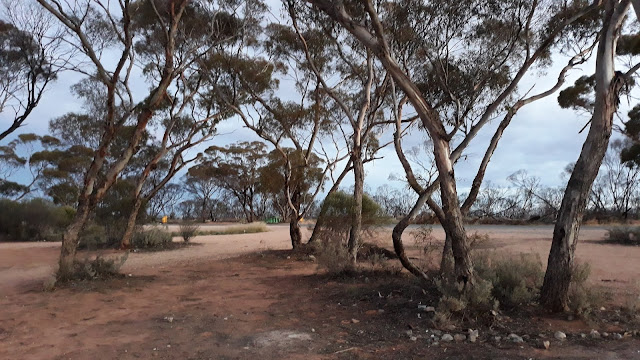 Five kms east of Balladonia is the Afghan Rock rest area, our chosen overnight stopping place.  We saw no Afghans, nor any rocks 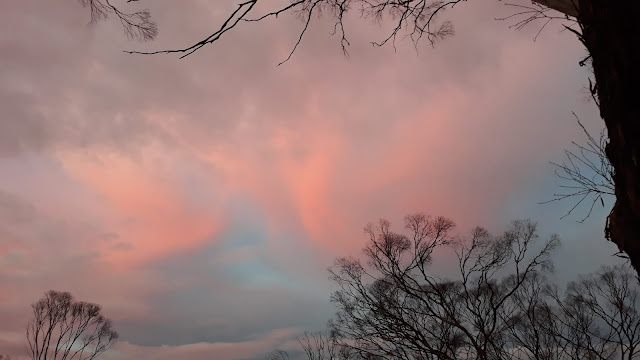 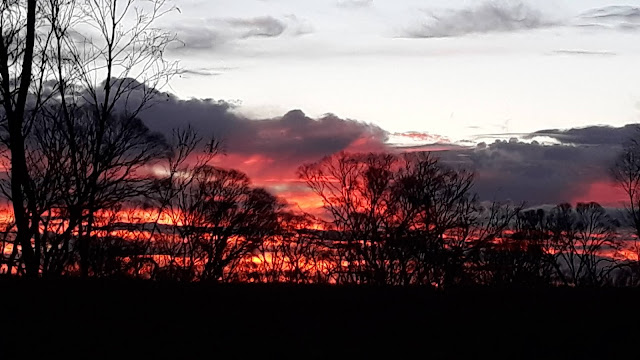 but we did witness a spectacular sunset 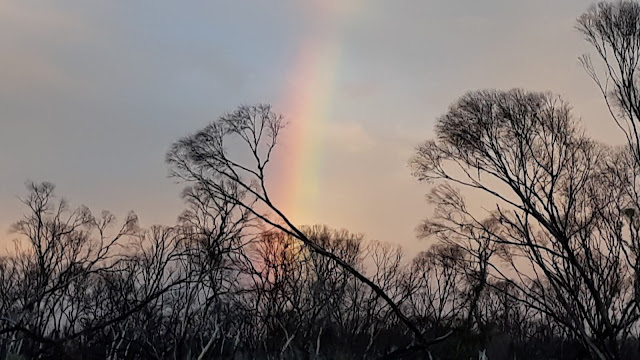 and the next morning, Friday, 11th a far off rainbow.
We left Afghan Rock at 7.45am and ten minutes later called in at Balladonia Roadhouse for the fuel top up and pit stop.  There was a brief shower when we left  and very little traffic.  110km east of Norseman we encountered mist, stopped at Norseman for fuel/coffee then turned right and headed towards Coolgardie.  The rain became rather heavy and we were surprised to see a runner, pushing a small trailer, on the road and can't imagine that it'd be any fun. 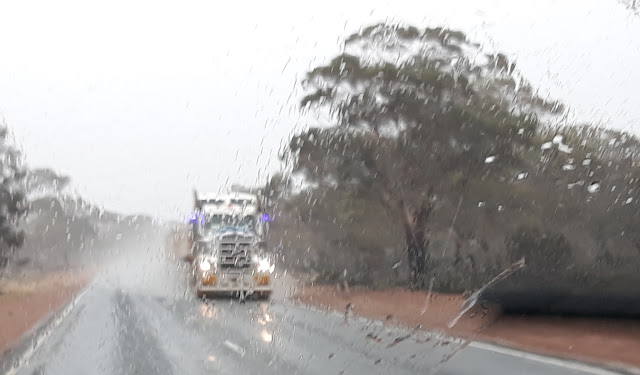 On the Norseman-Coolgardie Road - visibility low! 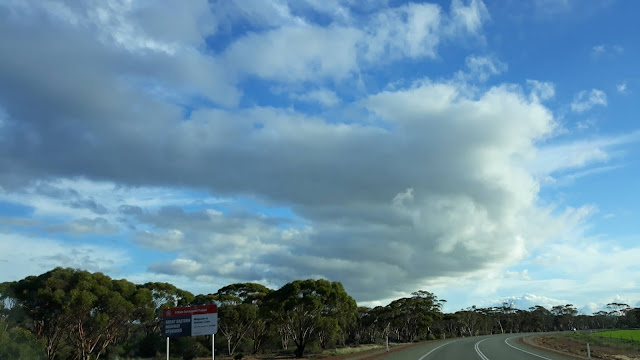 The road into Southern Cross.
After refuelling in Southern Cross, we continued on to Westonia, about 40km east of Merredin and 9kms in off the Great Eastern Highway and booked in to the very good caravan park where we had stayed for a couple of nights last year. 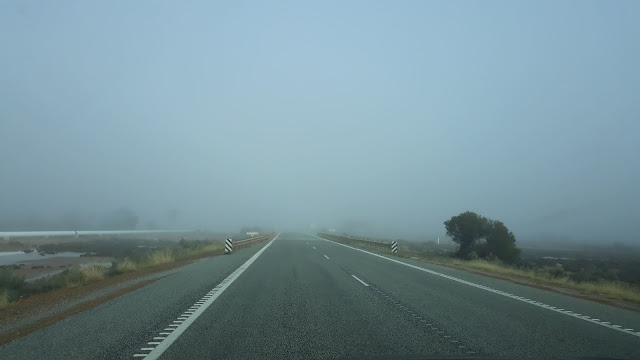 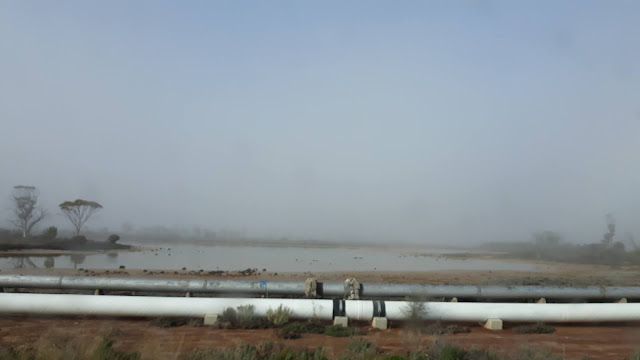 Saturday, 12th June : The last leg.  There was early fog before our departure from Westonia and though it did clear, when we drove into the Kellerberrin shire we encountered heavy mist.  We stopped in the town of Kellerberrin for morning tea, 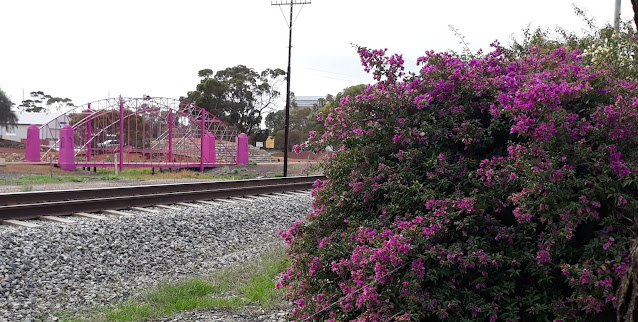 an RV friendly town with good parking for caravans and trailers, as well as a pink bridge!
We stopped in Tammin for a fuel top up, in Meckering for a comfort stop 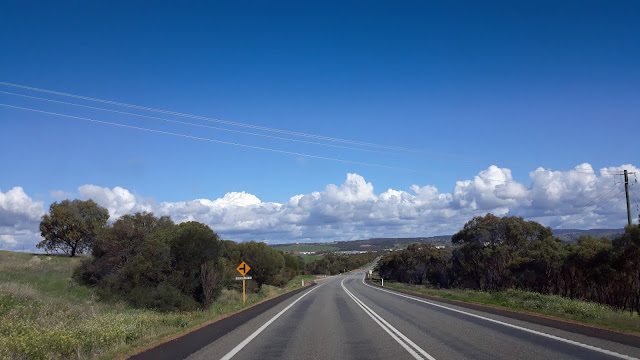 bypassed Northam,
and in Bakers Hill made a brief visit to the Pie Shop to buy a couple of sausage rolls to sustain us on the rest of the journey 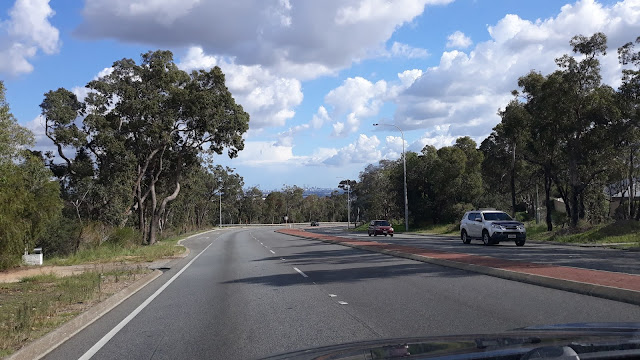 on Greenmount Hill
At 1.45pm on Saturday,12th June after a 12 week round trip, we arrived home with few thoughts of future travel, but it's only a matter of time!
Posted by Emmanjay at 15:04